Best known for being featured in kid movies like Finding Dory and Finding Nemo, clownfish have become a popular aquarium pet. Otherwise known as anemonefish, they belong to the subfamily “Amphiprioninae,” which is a part of the family “Pomacentridae.”

They are native to the warmer waters of Indian and Pacific Oceans, Red Sea and the Barrier Reef. It is estimated that the total number of clownfish species is 30, and they are found in attractive colors of yellow, orange, black and red with white patches or stripes on them. Sea anemones and clownfish have a symbiotic relationship that is beneficial to both of them. In other words, the two are inter dependent to each other. That said, here are interesting facts about clownfish that you probably don’t know. 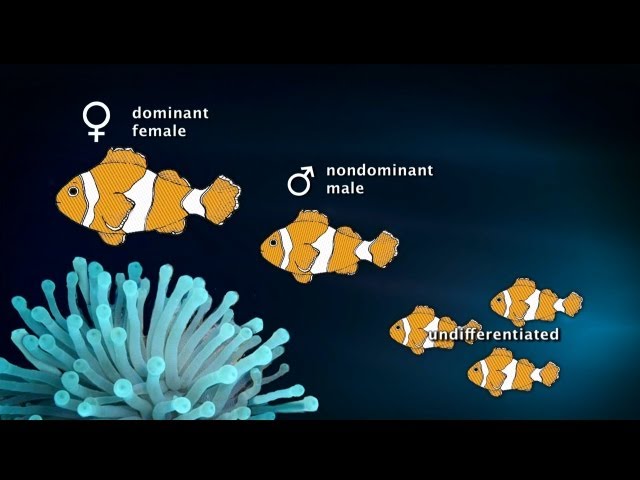 One of the most interesting and probably weirdest facts about clownfish is that they can change their gender. They all emerge from eggshells as males and not a single female clownfish is born from eggs. Cool, right? But how do female clownfish come about? Usually, a group of clownfish is headed by the dominant and strongest female. If that female dies, then the most dominating male member of the group changes its gender. The process of changing from male to female is known as protandry and this property makes clownfish sequential hermaphrodites. The dominating female of the group only pairs with the dominant male.

A female clownfish lays up to 1000 eggs at a time

Another remarkable fact about these adorable sea creatures has to do with their reproduction. In a group of clownfish, all of the members are male except for one dominating female. It only mates with the dominant male in the group and lays 1000 eggs at a time which are fertilized externally. This occurs near anemones and almost all the eggs hatch as the dominant male stands guard to protect them from threats. It is also fascinating that clownfish only lay eggs during the full moon and they hatch after dusk. The male clownfish helps the newborns to navigate the current, float and spread to other parts of the sea to make groups.

Clownfish have a strict dominance hierarchy

Leadership in a group of clownfish is subject to a strict hierarchy. The largest and most aggressive female is at the top of that hierarchy. In addition, only two clownfish in the group i.e. the dominant female and male, mate. Being hermaphrodites in nature, all clownfish are born males and some switch their gender when they mature. Suppose the leader of the group dies or is removed, the dominant male changes to female and the remaining males move up the hierarchy.

Clownfish are omnivores by nature meaning that they feed on both flesh and plants. They can eat undigested food from their host anemones while the fecal matter from anemone fish provides nutrients to the sea anemones. Anemone fish feed primarily feed on small zooplankton found on the water column like the larvae of tunicate and copepods. Amphiprion perideration, a species of anemone fish, however feeds primarily on algae. They also eat the tentacles of their host anemone. According to National Aquarium, clownfish also feed on small crustaceans and worms. They stay within the confines of their anemone hosts and although they may seek out food elsewhere, they don’t venture more than a few meters from their host anemones.

Symbiosis and mutualism with anemones

Sea anemones and clownfish have a symbiotic relationship, where creature provides benefits to the other. The sea anemones protect clownfish from predators and provide food from their tentacles as well as in the form of leftovers. The anemone fish, in return, protect the anemones from its predators and parasites. Anemone fish excrete plenty of nitrogen that plays a vital role in aiding anemones in regeneration and tissue growth. It has been theorized that the activity of clownfish leads to increased water circulation around sea anemones and that they use their bright colors to lure small fish to the anemones. The movement of the anemone’s tentacles allow for metabolism benefits by increasing size of body as well as respiration.

There are several theories that have been put forward to explain how clownfish survive the sea anemone poison. Some of them include:

While Disney’s Nemo may have spoken in English, the fact is that real clownfish communicate in a unique manner. The norm is to produce clacking noise when they sense an intruder in their territory to warn the rest of the group. On average, clownfish generate five clicking sounds in a minute. It is, however, not clear how they produce the noises. Some researchers theorize that the sounds produced by clownfish when communicating emanate from jaw movements. There is also a theory that clownfish recognize their ‘home’ reef by its sound. And while this was already tested with jaw implants; scientists at Parmentier are still skeptical as to whether clacking jaws are what guides anemone fish home.

Clownfish, particularly the Percula clownfish, has a habit of performing an elaborate dance with an anemone when they first meet. This helps them acclimate to their host. The dance involves touching the anemone’s tentacles with different parts of its body. During this process, the clownfish produces a layer of snot on the skin that allows for protection against the fish-eating lethal sting of the sea anemone according to National Geographic. This is done until the clownfish is acclimated and the skin wholly protected by a layer of mucus.

The Ocellaris clownfish are not endangered. But while that is the case, it’s important to note that 15-30 percent of the world’s reefs were destroyed in the last generation. This is largely attributed to fishermen catching them to sell as pets. National Geographic estimates that the sales of clownfish have tripled since the release of Finding Nemo. The Nemo effect has raised a cause for concern among conservationists as some areas are now overfished in a bid to meet the demand for clownfish. The Aquarium Welfare Association is quick to note that many people purchased these fish without a clue as to their proper care. Inspiration from the movie also inspired children to flush their clownfish down the toilets hoping to set them free.

False clownfish are often found in the coral reefs off the coasts of Southeast Asia as far north as Japan and Australia. They mainly found around specific types of anemones, a sea creature that attaches itself to the ocean floor and uses its tentacles to attract food. They also have stinging cells called nematocysts that release a toxin when in contact with prey or predators.

Clownfish are probably the most famous aquarium pets in the world and with that arises the necessity to know as much about them as possible. This makes taking care of them easier and if we are being honest, who doesn’t appreciate a little knowledge about animals? Not if you are fish enthusiast for sure. Nevertheless, this post is far from exhaustive. There is so much to learn about clownfish that if we were to note all of them down, we would end up with a book.