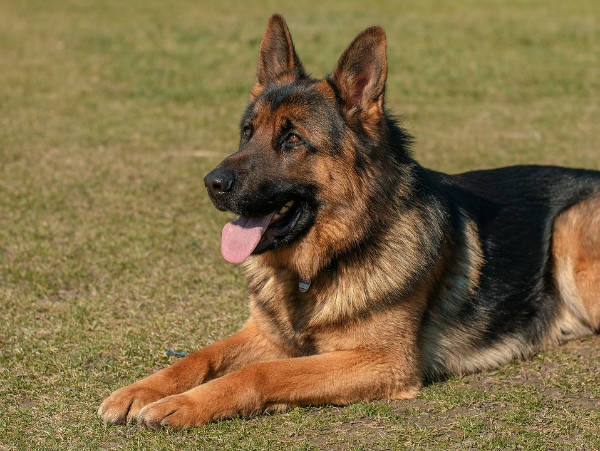 Making the choice between a Belgian Malinois or a German Shepherd can be a tough one. The Belgian Malinois and German Shepherd have often shown similar characteristics. Some people say they are variations of each other while others believe they are two independent breeds. You’d be forgiven to think they’re the same type of dog as the breeds have a similar color and build. They are, however, quite different.

Among the two, the German Shepherd is the most common. German shepherds are very popular as house pets and both are military dogs. Below is a peek on the difference and similarity of the two dogs.

The German shepherd, at a glance…

The German Shepherd is intelligent and hardworking. They were bred with the purpose of herding and protecting sheep. This required that the breed be of the highest intelligence, agility, and have a strong sense of smell. For more information on the history and origin of the German Shepherd, here is an informative article. Additionally, AKC has good information on this and other  working dog breeds.

Today, German Shepherd’s are commonly trained for military and police activity. They often portray heroism in extraordinary ways. Apart from military training, dog owners with disabilities, train them as guide dogs. In the UK, the German Shepherd also rose to stardom as they were often used successfully in films.

German Shepherds are known for their strength and athletic ability. They are available in various colors but mostly black and tan. Other colors include; solid white and solid black. Their coats are very thick and medium length.

The Belgian Malinois, at a glance…

With time, owners trained them as protection dogs, friendly pets, and police or military service dogs. The Malinois are sensitive and do not respond positively to harsh training tactics. They have short hair and are fawn in color. The dog is very active.

The Belgian Malinois is often confused with the German shepherd. Compared to the German Shepherd, the Malinois is a bit smaller. Their coats are often red, brown and fawn.

Just like the German Shepherd, the life expectancy of a Pastor Belga Malinois is 10-12 years.

The fur coat and other physical appearance

The large and medium sized German Shepherd dogs have a black saddle and a tan colored fur. The dogs have coats of various colors inclusive of black silver and red. They have hair that lies very closely to their bodies. Their hair is straight and sometimes wavy and very dense.

German shepherds do not have a shedding season. Instead, they shed all year long proving tedious for dog owners since they constantly clean the dog’s fur.

The German Shepherd is 24-26 inches tall. Their weight ranges between 75-95 pounds.

The Belgian Malinois, on the other hand, have straight hair, but short and fawn in color.  They have black ears and a slight white color on their toe tips. Sometimes they have a white spot on their chest.

The Malinois is also 24-26 inches tall. Its weight, however, is significantly lower than the German shepherd. It ranges from 60-65 lbs.

The shape of the head of a Belgian Malinois differs from that of a German Shepherd. The Malinois have chiseled like heads. They have triangular shaped ears.

Training a German Shepherd is best done when they are still puppies. Training a younger dog is easier than reversing an older one. They are very intelligent and can prove stubborn. As part of their training, German Shepherds are treated and rewarded to boost motivation. Trainers using this stunt make the dog eager to learn.

As first timers, they prove troublesome to train. Nonetheless, they are often fond of their training sessions. The German Shepherd is a fast learner and is often successful in its activities after learning.

Unlike a German Shepherd, the Belgian Malinois are easier to train and less stubborn. They are not very intelligent and thus get deeply engrossed in the activity. This trait makes it easier for the trainer to control them. They are curious animals and always want to learn new things.

However, the Malinois tend to be very sensitive and energetic. These traits can overwhelm a dog owner who teaches the dog himself. In such instances, you should seek an expert’s assistance with training.

How much should you feed?

German shepherds have a larger build. Due to this, they have to consume food proportionally to their body size. Dog owners divide 3-4 cups of high-quality dog food into two meals that a dog consumes within 24 hours.

German shepherds should not consume food with a high starch content. Starch is troublesome to digest. The dog’s digestive system is mainly engineered to digest protein.

While a German Shepherd can eat up to 3 or 4 cups in a day, a Belgian Malinois consumes less. The Malinois is a medium sized dog and requires 2-3 cups in a day.

Like the German Shepherd, Malinois dog owners should not feed them a diet high in starch. Instead, they should incorporate raw meat and vegetables.

German Shepherds come across as extremely detached and shy dogs, they are in fact the total opposite. They can be very active once they get to know you and their territory.

They are known to be intelligent and are choosy when it comes to making friends. They rarely make friends, and when they do, they tend to be profoundly loyal. This kind of loyalty makes them approachable. A German Shepherd is very protective, and there is a feeling of safety around them. They are perfect watchdogs.

German shepherds are often a part of various rescue teams. Living your German shepherd alone for a long time exposes them to separation anxiety. They also need a lot of exercise and activity. Otherwise, they resort to annoying barking or chewing.

The Malinois get their character on factors such as heredity, socialization and their training. Their socialization and training are best when the dog is a puppy. To learn more about a Malinois’ temperament, you can visit one of its parents especially the mother.

The Grooming of the two Canine Friends

The German Shepherd is a heavy shedder. They have no specific season for shedding. German Shepherd owners are always cleaning after their hair throughout the year. This way they earned their nickname the German Shedders. Dog owners reduce this task by brushing their dogs at least three times a week.

It’s best not to bathe your dog too often. The coat tends to lose its natural oils and this leads to fur damage. German Shepherd owners wash them only when the need arises. You should often cut their nails. The German shepherd is an odorless dog and naturally clean. Despite this trait, you must always inspect your dog in case of infection. Always brush their teeth every week.

On the other hand, the Belgian Malinois are easier to groom. Their fur is shorter and straight, thus easy to brush. Malinois owners should brush their dogs every week. Just like the German Shepherd, you bathe them only when necessary. At least the Malinois experience heavy shedding during spring and fall. Dog owners can easily control this kind of shedding. Their teeth are also brushed 2-3 times a week. This prevents tartar accumulation and periodontal and gum disease.

The health of a German Shepherd and a Belgian Malinois

The German Shepherds are prone to many diseases especially when families adopt them from irresponsible breeders. Diseases that they commonly suffer from are elbow dysplasia and hip dysplasia.

To ensure your adopted German shepherd is not prone to several of these conditions, ensure your breeder is trusted. Owners should keep their eyes, hips, blood and elbows in constant check. Keeping them clean also prevents infections.

The Belgian Malinois are healthier than the German Shepherd. They also have some common health conditions they are prone to; like the German shepherd, the Malinois also suffers from elbow Dysplasia and hip Dysplasia. Other conditions include; progressive retinal atrophy and anesthetic sensitivity.

Dog owners should regularly check their hips, to keep the Malinois in a continuous state of health.

Aggression of a German shepherd vs. a Belgian Malinois

German Shepherd dogs express less aggression compared to the Belgian Malinois. They tend to be calmer and peaceful.

Compared to the German Shepherd, Malinois they are more aggressive. They have a smaller size and are more active. They are faster and more energetic.

The relationship with children and other pets

With the right training, a German Shepherd can be the best dog for your kids and family. A larger breed would be harder to initiate to the family with kids compared to a puppy.

Pups tend to get used to the family and other pets as they grow. However, the puppy will take up most of your time. Their training also requires patience and persistence.

The Belgian Malinois are friendlier with kids compared to the German Shepherd. However, when you are raising them alongside your kids and other pets, they also consume much time. Raising a puppy requires a clear schedule and not a full time working individual.

Dog owners need to expose the Malinois to great socialization conditions, to achieve a good relationship with kids.

Both the dogs are good with family and kids when well trained. No matter how trained and friendly a dog may be, owners should not leave the dogs alone with children. A dog may tumble over the kids and hurt them due to their size.

Exercising a German Shepherd and a Belgian Malinois

Both the Malinois and the German Shepherd, are fond of outdoor activities. They demand attention and activity. Taking the dogs for long walks and outdoor time in new surroundings boosts their mental and physical health. Keeping both the dogs exercised is paramount. This way, they do not engage in destructive and annoying barking and chewing.

The cost of a German Shepherd vs Belgian Malinois

In a nutshell, a German Shepherd and a Belgian Malinois have a lot in common. They also have several distinguishing traits. They were both initially trained to become herd dogs. Later dog owners trained the two dogs as watchdogs, protecting dogs, military trained dogs, homely pets, and friends.

Their fur coats are different both in color and mass. A German Shepherd has a dense and thick coat. A Malinois, on the other hand, has a less dense coat. Training both dogs is best done when the dog is a puppy. Both dogs are loyal when they get used to the people around them. They both also have separation anxiety when detached.

So what do you think, have you made a choice between the two? Let us know in the comments which suit you best.

Save this article for later by Pinning it on Pinterest. Just hover over the image and click the P

12 thoughts on “Belgian Malinois vs German Shepherd – What’s the Difference?”