There are thousands of reasons as to why the Saint Berdoodle is a popular dog option for many households. Maybe some are looking for something that will give their kids some sense of responsibility at the same time increase the family number. Or perhaps, they just want a dog that drools and sheds less especially when allergic to fur. Irrespective the reason, there is so much to know about your new canine friend before enlisting him as an official member of the family. Here are some few facts you need to know about the Saint Berdoodle.

Are they a Purebred or Not?

Note: Saint Berdoodle may result from good intentional breeding or be a creation of puppy mills and bad breeders trying to cash on the growing trend on designer dogs. For this reason, it is important to buy your dog from an established licensed dog dealer.

There have been many cases of promises that these dogs will inherit the best of both parents. However, the reverse is the case as with genetics you never know. Some dogs do end up with the best qualities, but in other cases, the dog carries both the good and bad or even worse gene qualities.

It is assumed that this dog originated from Switzerland and is a result of crossing Mastiffs with native Alp dogs. The dog gets its name from the dangerous Alpine pass in the Alps where it was used as a rescue dog by the monks in locating lost travelers. Saint Bernard is a friendly, kind but steady dog. Just like every other dog, he enjoys being the center of attention but not as much as other kinds. Despite his large size, this dog is perfect for older kids and households with more living room space.

The Poodle is a loyal, protective dog best known for his high IQ, aloof manner and wacky physique. He is assumed to have originated from Germany and was bred by the waterfowl hunters to help them in their duck hunting expeditions. The Poodle would jump into the water to retrieve the ducks once the hunter made a clear shot. However, once the French got hold of him, he was bred into the Poodle everyone is familiar with today. The Poodle comes in three different sizes; standard, toy, and miniature.

A member of the AKC or not?

Even though his popularity is growing in numbers, the Saint Berdoodle is yet to be inducted into the American Kennel Club. This case may be due to his mixed breed status that disqualifies him as an actual candidate for the AKC. However, this family dog is recognized and registered with other mixed dog registries such as the International Designer Canine Registry, American Canine Hybrid Club, Designer Dogs Kennel Club, Dog Registry of America, Inc. and the Designer Breed Registry.

Unlike most dogs, Saint Berdoodle tends to live for the longest period when provided with proper care and regular checkups. His life expectancy ranges between ten to twelve years on the most. During this time, he would have lived a happy, active life full of attention seeking.

Saint Berdoodle is an affectionate, loving dog that enjoys being the center of attention. He prefers to share a close bond with each family member and feels neglected when left on his own for a long time. He tends to get destructive when lacking attention or proper supervision.

Saint Berdoodle is also known to be a territorial dog – he wary of strangers and is extremely protective of his family members. He makes a perfect alarm just in case a bugler tries to make an entry.

Overall, Saint Berdoodle is the ideal dog for households with big kids. He gets along well with children and is extremely patient with them. When socialized from an early age, your Saint Berdoodle will pretty get along with all other pet family members. His combination of intelligence and an unlimited supply of energy makes him perfect for a training exercise class.

The Saint Berdoodle inherits both of both worlds. From the Saint Bernard, he gets his large size and stature while from the Standard Poodle’s side of the family, he gets his fabulous coat. Saint Berdoodle curly hair is a combination of both silky and coarse hair. He is a low to moderate shedder, making him an ideal hypoallergic dog for people with dog allergies. However, for those that want a minimal shedder, it’s best to choose Saint Berdoodle that has coarse, curly hair.

Unlike the Saint Bernard that tends to drool a lot, Saint Berdoodle is not much of a drooler. His mouth stays wet-free for most parts of the day unless its feeding time and dying for that tasty treat.

The Saint Berdoodle weighs around 200lbs and stands to 30 inches high. He is a powerful, muscular dog with a broad chest, floppy ears, a long rounded muzzle with a black nose, large round head, and dark almond shaped eyes. His color ranges from apricot, fawn, black, white, brown to mahogany.

Exercising your dog is imperative especially if he is an energetic dog like Saint Berdoodle. Unlike small dogs, this big boy requires regular exercise that keeps him mentally and physically stimulated. This call means more walks down the park – something that does well for the both of you. He will need early leash train and an owner who can handle his massive physique. Furthermore, he is an intelligent dog so teaching him some new tricks now and then would be easy and fun for all. However, Saint Berdoodle tires quickly and may require several breakouts during the day. Your dog may perform in a rush then pose for a short relax nap.

Grooming of this big boy depends on his coat type. However, regular brushing or combing is expected with keen attention to his ears and eyes to avoid chances of infection. Bathing maybe as often as you require – it could even be once after a month.

Saint Berdoodle is perfect for homes that have older kids with a large living space area for this large dog. As an intelligent animal, he will require more but less strenuous train. Saint Berdoodle as stated earlier, needs regular exercise due to his dynamic nature, for this reason, it is important to look into your schedule to see if he fits in your household routine before settling for one. Furthermore, having a leash on helps reduce the damage he is likely to cause when left out alone. 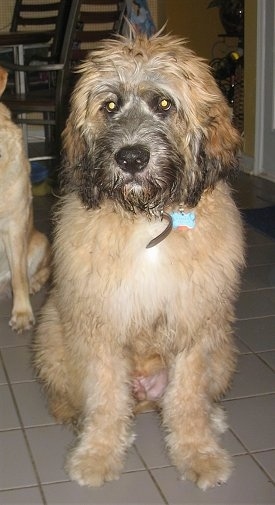 Saint Berdoodle does not have serious health issues that are known as of now. Just like most hybrid dogs, Saint Berdoodle tends to take the best genes of both worlds minus the health defects that plague the parent dogs. However, this is relevant on how the breeding was done and the health status of each parent dog. If the designer dog is bred from parents with diverse gene pools, it may have far lower chances of expressing defects associated with the parent breeds.

Prospect owners are encouraged to know the health history of the Saint Berdoodle’s parents for early indications of changes of a genetic disease that their dog is like to suffer.

In spite all of the positive traits, the Saint Berdoodle requires regular ears and eyes grooming to eliminate chances of infection. Your beloved dog is also likely to suffer from skin problems, hip dysplasia, bloat, Wobbler Syndrome, and Willebrand’s diseases – which affects his blood’s ability to clot.

Please Note: They’re not ideal for folks who are scared of big dogs or have small children, people who want a completely outside dog or are extremely super active.

Saint Berdoodle are amazing big dogs. You can benefit so much be introducing one into your household. But first, you need to acquaint yourself with what to expect. We hope that the few tips given have given you some insight on the Saint Berdoodle.